So seriously what is the treatment for bluebottle stings? Seawater? Hotwater? Vinegar? Coldwater? Guess what,  it has changed again! We get our resident pharmacist to review the evidence.

As the northerly blows in on the Gold Coast today, Active Hand Therapy decided to look more closely into the latest guidelines on Bluebottle stings.

Bluebottle Facts To Impress Your Friends

Bluebottle Facts to Impress Your Friends 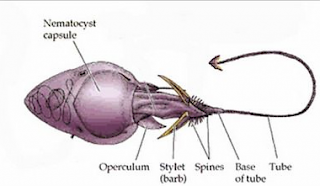 How do They Sting?

Attached to the bluebottle's tentacles are microscopic capsules called nematocysts. Among the most complex intracellular structures known and only 0.001mm in diameter, these are the bad boys that inject the poison. Inside a nematocyte capsule is a tightly coiled harpoon that fires when the right chemical touches it. Kinda like millions of tentacles on a tentacle. Once the barb penetrates, a toxic poison shoots out into the victim, killing it or reducing it to a blubbering, screaming mess. 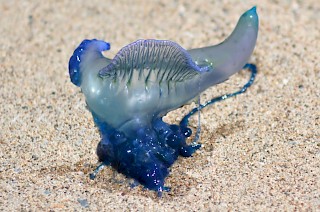 So to get to the point, how do we neutrilise these buggers.

Look around if its a northerly wind. (From Brisvegas direction for anyone on the Gold Coast). Or listen to the lifeguards who will post reports if any are seen in the water.

When the tentacles hit your skin, the poison doesn't actually release straight away. A small amount fires on first contact (1%) then the rest will release over a ten minute period. So the quicker you remove them the less poison will be released into your skin. [2]

Firstly to remove the tentacles use tweezers, long fingernails or ask someone you don't like (finger skin is usually too tough for the harpoons to pierce).

Now that you have removed the tentacles the invisible poison capsules may still be sitting on your skin and can fire for up to TWO weeks so it is important to wash the area really well. However, there is a catch (of course there is) - the capsules will release more poison if pressed or the wrong solution passes over them. So rubbing them off (even with sand) can be a bad move.

So we have to wash the area to remove the poison capsules and guess what - vinegar is back! WHAAAATT? I thought vinegar was no longer recommended? Well according to the latest studies, new technology has allowed a closer look at the nematocyte firing process and it has confirmed what everyone could feel, that vinegar helps. For reasons unknown, vinegar stops the release of the poison from the capsules. Even a 30 second wash will halve the amount of venom released into your skin. Vinegar is still the preferred treatment for all other jellyfish stings and now the research show that we should be adding it to the common bluebottle as well. A previous study showed that vinegar actually increased the pain response however it is now thought this was seen for a larger, less common form of bluebottle. It cannot be diluted with anything (water and alcohol can stimulate release). So if you happen to be at the beach and have a bottle of vinegar handy, I reckon you're onto a good thing. If not, the next best thing to use is sea water. Normally a capsule won't release in the ocean however sea water can increase the spread of the capsules that are already clinging to the skin and they can go everywhere and reattach. Try not to use the shower as fresh water will release the venom as will rubbing the area. [2]

After washing,  soaking in hot water can reduce the poison damage. When the poison is injected into the skin, red blood cells are destroyed and this causes intense pain. Hot water will reduce the number of blood cells damaged and can reduce the amount and length of the pain felt. Cold water may actually worsen the response. It is thought that the cold water may keep the venom capsules 'alive' causing them to start discharging when the cold pack is removed.

Paracetamol can be given if you are in intense pain or if you are feeling particularly soft. Children can also suffer extreme pain and paracetamol may help to reduce discomfit. The effects of paracetamol take up to twenty minutes to begin so you may start to feel better before the medicine kicks in.  A doctor may prescribe other medicines to reduce pain symptomps if particularly painful.

Bluebottle stings rarely cause serious damage however allergic reactions can occur. If large areas are affected or if you have other concerning medical conditions, seek medical advice.

So there you have it, vinegar is in, sand is out and noone feels like a swim this arvo.